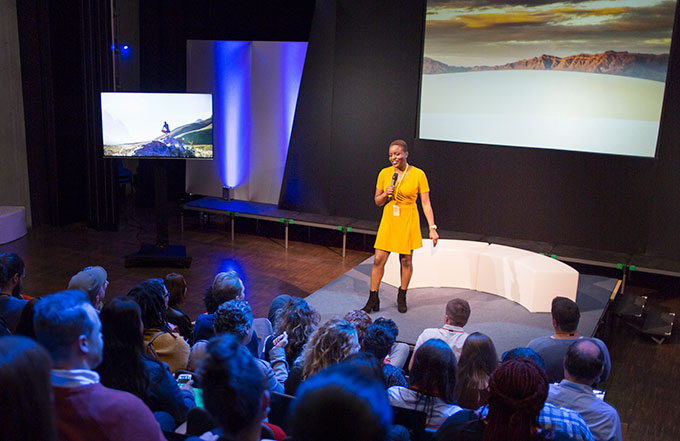 After studying the most memorable moments from some of the world’s most powerful presentations, I have the answer to creating an emotional connection with your audience: rhetorical strategies.

Think back to the best presentation you have ever seen, whether it be in-person or online. Why does your brain think of that presentation as memorable?

Most likely, it’s because of how the speaker made you feel. 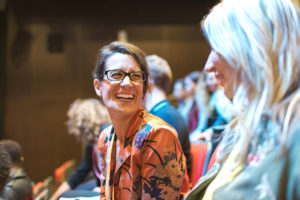 I’m not trying to be cheesy! An emotional response is a meaningful response, and that reaction stays with you long after the presentation is over. Whenever you think of that speaker or of that topic, your brain will bring back those feelings for you- whether they be of motivation, inspiration, sadness, empathy, or otherwise.

Rhetorical strategies use language to convey special meaning and/or to persuade someone. Basically, these strategies can be used to intentionally invoke feelings in others.

If your first reaction to all this is “Huh?” that’s okay- so was mine. Here’s how I understand it now: rhetorical strategies = emotional connection = memorability.

If you’ve ever considered becoming a master presenter (no judgement if you have), you need these tools in your repertoire ASAP. They’re just so effective! 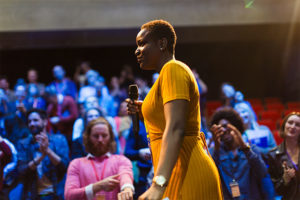 Unless you’re above any of these greatly respected people, I’m betting that you could benefit from a little rhetorical strategy in your next speech!

25 rhetorical strategies from the best minds

We’ve compiled 25 rhetorical strategies from the most memorable presentations on the planet so that your next presentation is undeniably memorable. Ready to begin?

Two or more words in a row that start with the same sound.

“They are part of the finest fighting force that the world has ever known. They have served tour after tour of duty in distant, different, and difficult places.”
– Barack Obama

A statement that hints at something instead of being direct about it.

“You must borrow me Gargantua’s mouth first. ‘Tis a word too great for any mouth of this age’s size”
– Shakespeare

Repeating the last word (or words) of a sentence at the beginning of the next sentence.

“Tonight, we are a country awakened to danger and called to defend freedom. Our grief has turned to anger, and anger to resolution.”
– George W. Bush

A literal comparison of two things.

“A good speech should be like a woman’s skirt: long enough to cover the subject and short enough to create interest.”
– Winston Churchill

Using the same word (or words) to begin 2 or more sentences (or paragraphs) that follow each other.

“I trust Hillary to lead this country because I’ve seen her lifelong devotion to our nation’s children – not just her own daughter, who she has raised to perfection but every child who needs a champion: Kids who take the long way to school to avoid the gangs. Kids who wonder how they’ll ever afford college. Kids whose parents don’t speak a word of English but dream of a better life. Kids who look to us to determine who and what they can be.”
– Michelle Obama

A reversal of the typical ordering of a sentence.

“This much we pledge, and more”
– JF Kennedy

Repeating one (or more) words at the end of a sentence.

“It was a creed written into the founding documents that declared the destiny of a nation: Yes, we can. It was whispered by slaves and abolitionists as they blazed a trail towards freedom through the darkest of nights: Yes, we can. It was sung by immigrants as they struck out from distant shores and pioneers who pushed westward against an unforgiving wilderness: Yes, we can”
– Barack Obama

A contrast of thoughts.

“That’s one small step for man, one giant leap for mankind.”
– Neil Armstrong

Leaving out conjunction words (as or and) from a sentence.

“…and that government of the people, by the people, for the people shall not perish from the earth.”
– Abraham Lincoln

Repeating a vowel sound in a sentence.

“I feel the need, the need for speed”
– Tom Cruise (from the movie Top Gun)

The reversal of the latter of two parallel sentences.

Inserting a word (or more) between the components of a compound word.

Another name for antistrophe (see above).

“…and that government of the people, by the people, for the people shall not perish from the earth”
– Abraham Lincoln

Using a word or phrase only to fill out a sentence for grammar, rhythm or balance.

“… we shall never surrender, and even if, which I do not for a moment believe, this Island or a large part of it were subjugated and starving …”
– Winston Churchill

The repetition of a word within the sentence.

“That’s 58 songs every second of every minute of every hour of every day.”
– Steve Jobs

Exaggerating a description for emphasis.

“Best version of Google Maps on the planet, widgets, and all with Edge and Wi-Fi networking.”
– Steve Jobs

Posing a question that you will answer yourself.

“When the enemy struck on that June day of 1950, what did America do? It did what it always has done in all its times of peril. It appealed to the heroism of its youth”
– Dwight D. Eisenhower

An understatement that expresses an affirmative by negating its opposite.

“I am not unmindful that some of you have come here out of great trials and tribulations.”
– Martin Luther King, Jr.

“The situation has developed, not necessarily to our advantage”
– Emperor Hirohito, announcing to the Japanese people that atomic bombs had been dropped on Hiroshima and Nagasaki

Comparing two unlike objects to provide a clearer description.

“All the world’s a stage, and all the men and women merely players.”
– William Shakespeare

using a sequence of identical constructions in writing

“Tell me and I forget. Teach me and I may remember. Involve me and I will learn.”
– Benjamin Franklin

Repeating two (or more) different words with identical or similar meaning within the same sentence.

“That is heart-breaking, it is wrong, and no one should be treated that way in the United States of America”
– Barack Obama

Comparing two unlike things using the words “like” or “as” with an example.

“We will not be satisfied until justice rolls down like waters, and righteousness like a mighty stream.”
– Martin Luther King, Jr.

Repeating one (or more) words at the beginning and end of successive sentences.

A sentence with three clearly defined parts of equal length

“Tell me and I forget. Teach me and I may remember. Involve me and I will learn.”
– Benjamin Franklin

If you got a little lost amidst the English jargon, here are the 2 main takeaways you need to know: 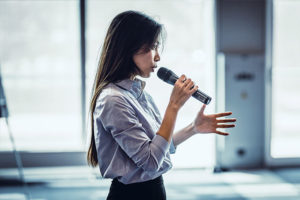 In sum, the best designed presentations, a slick new outfit, or a commanding voice may impress an audience initially, and can be important to gain their attention, but they lack true substance for any long-term retention. Rhetorical strategies are the single greatest tool for memorability. If you recognized even one of these examples, you just proved that rhetoric strategies are memorable. Why not start using them to your advantage?

Incorporating rhetorical strategies is kind of like learning how to ride a bike – you’re going to think you look unsure the first few times you try and you’re probably going to walk away with some scrapes and bruises. But, once you gain confidence, you’ll be able to ride circles around everyone else.

See what I did there? Here’s to being memorable!

Note: All definitions have been adapted from Your Dictionary.

Check out our Top 30 Most Popular Presentations of All Time, 16 Strategies Used by Pitch Deck Designers, 10 Things to Never Do When Presenting, or read our Top 10 Presentation Tips.

Looking for some creative help for your next presentation? Our team of talented ninja designers would love to assist!