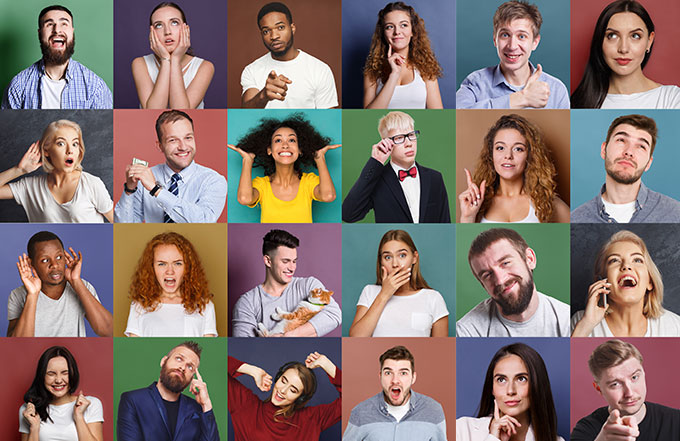 That’s why we gathered seven (7) of the most relevant facts about non-verbal communication in business. We promise that when you’re done reading this, you’ll approach this hidden aspect of communication within your business in a whole new way.

Before we begin, we need to better clarify what non-verbal communication is, what types exists, and why this secret way of communicating matters. Once we establish this common ground we can delve into the seven facts which can help you confidently lead in this hidden communication style. Ready? Let’s go!

Have you ever found yourself in a staff meeting where the biggest hogwash you’ve ever heard somehow sounds like magic to your ears because the speaker sounds so confident?

Or better yet – imagine you’re on the fence about purchasing a product from a salesman, but something about the way he talks or moves makes you cave in and buy it?

If this is you, you’ve already gotten a first-hand experience of how effective non-verbal communication can be.

To break it down for you, non-verbal communication refers to how two or more people communicate their feelings and thoughts to each other without the use of words. In other words, it’s all about how you transmit messages to an audience through the use of both physical and physiological cues.

It’s important to highlight the fact that non-verbal forms of communication do not have any linguistic elements like syntax, semantics, and grammar. For that reason, something like American Sign Language is considered verbal communication.

Non-verbal communication goes hand-in-glove with other skills like public speaking and presenting.

But before we get into that, let’s cover some more basics on non-verbal forms of communication.

Now, let’s take a closer look at the meaning of each. 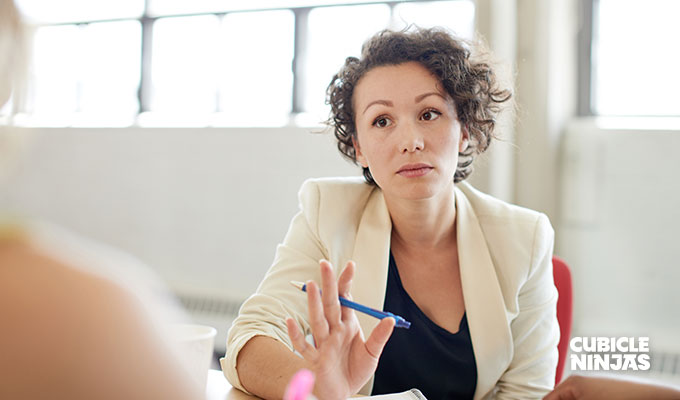 This is one of the most recognizable types of non-verbal communication out there. Body language refers to any type of movement done by your body. Those movements can be done consciously or unconsciously.

For instance, a prime example of conscious body movement is when someone leans closer in the direction of a speaker at a meeting. This act shows that that person is interested in what the speaker is saying.

Now, let’s consider this: when people are disinterested, they usually can’t keep eye-contact with a speaker. They stare around the room looking for an object to catch their attention, they shift constantly in their seats — they do everything but focus on the speaker.

This is unconscious body movement at its finest: you’re not making an effort to do it, it just happens automatically. 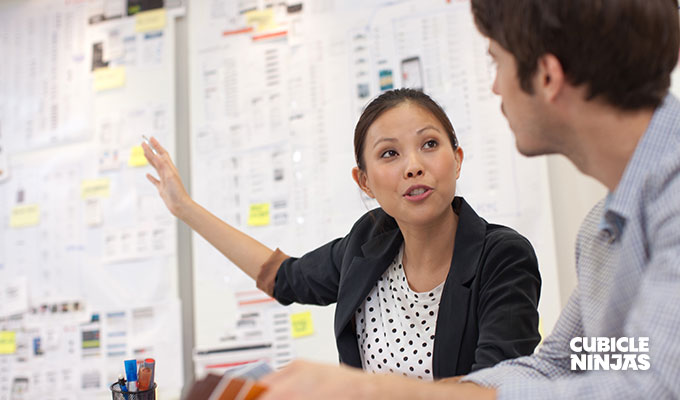 Eye contact is one of those non-verbal cues that tells a lot about how interested you are in what someone is saying. Lack of eye contact can also indicate boredom, fear, or even that your words are really hitting home.

If you’re looking at someone while they speak, it shows that you value that person’s contribution. Maintaining eye-contact with an audience is also a way to boost your own credibility as a speaker and make yourself seem more personable/approachable to your audience. 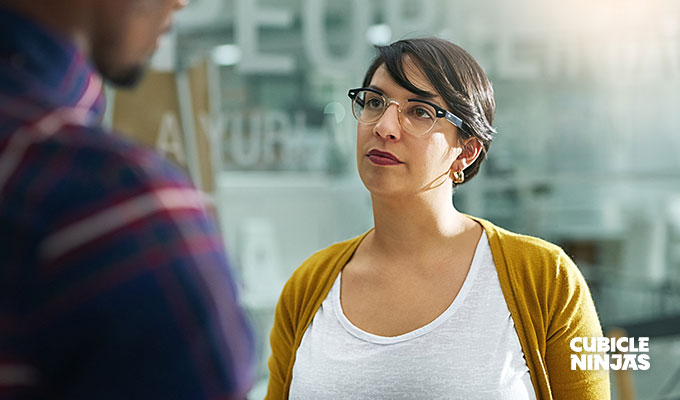 Someone can pretty much sum up how you’re feeling just by looking at your face. While a number of factors play a role in determining how people read your facial expression, your eyes are the number one giveaway.

It’s scientifically proven that your eyes tell a lot about your emotions — just read Dr. David Ludden’s report on how much the eyes say about how you’re feeling. For example:

When people are sad or worried, they furrow their brow, which makes the eyes look smaller. Yet when people are cheerful, we correctly call them “bright-eyed.” That’s because people raise their eyebrows when they’re happy, making the eyes look bigger and brighter.

We can tell a true (or Duchenne) smile from a fake by looking at a person’s eyes. The mouth shape of a smile is easy to fake—we do it all the time out of politeness. But the eyes are the giveaway: When we’re truly happy, we not only smile but also crinkle the corners of our eyes in a “crow’s feet” pattern. But when people fake a smile, they usually forget about their eyes. 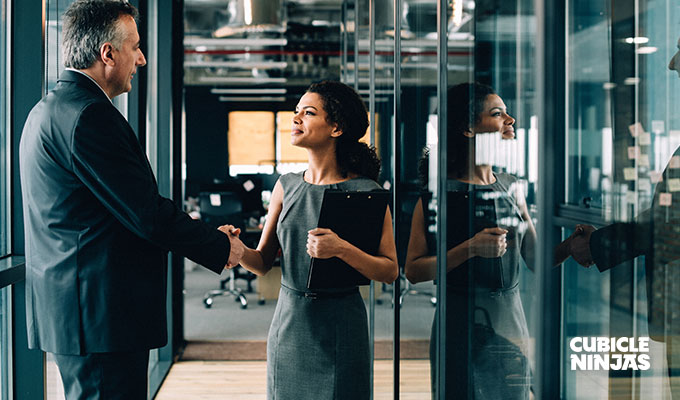 How you dress for an event tells your audience how much you value an occasion. It tells people just how serious you are and goes a long way in leaving a first impression. It can also be used to indicate how well you understand your audience, alongside your desire to blend in or stand out within the crowd. 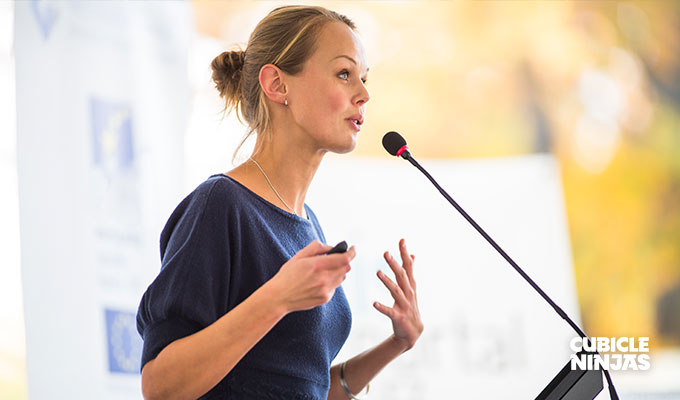 Gestures are a sure way to spice up your presentation and keep your audience’s interest piqued. Little things like head nods, thumbs-ups, and intermittent movements with your hands all send out positive communication cues to your audience. 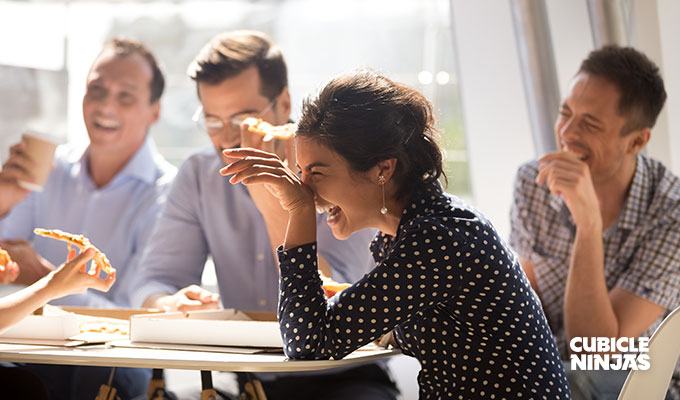 Have you ever heard someone say “It’s not what you say, rather, how you say it?” This is what paralinguistic cues are. This takes into account your tone of voice, pitch, and volume.

In the business world, there’s no way that you can see success if you don’t work on your non-verbal communicative skills. It’s simple: business hinges upon human interaction. Don’t believe us? Let’s take a look at customer service stats.

In 2017, Microsoft issued a report indicating, among other things, that 96% of customers viewed customer service as an important part of why they remained loyal to a brand.

Now, let’s compare those findings with stats from American Express, where one-third of consumers stated that they would call it quits on a company after just one bad experience.

So where does non-verbal communication come in? Here’s how: a huge part of customer service isn’t what you do for people — it’s how you treat them.

That involves a number of non-verbal forms of communication: i.e. smiling, appearing approachable, relaying concern when a customer has an issue. All of these are elements that make up good customer service. That’s why all businesses need to care about it. 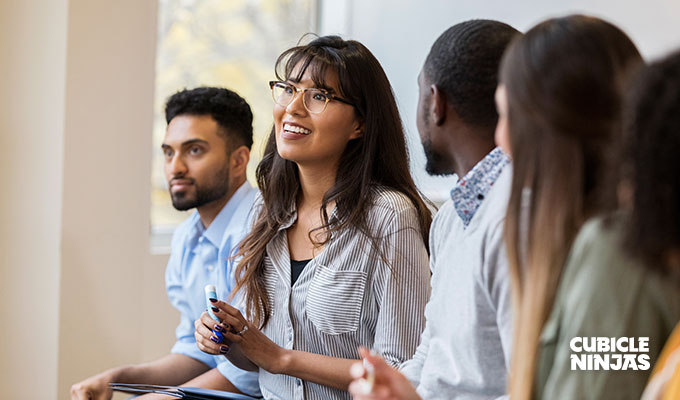 1. Non-Verbal Communication Is Linked To Culture

It’s been well documented that culture and communication are intimately linked. The same goes for non-verbal communication – it’s joined to culture at the hip.

While there are general similarities between non-verbal cues used all over the world, you can’t just assume that the same non-verbal cues that you use in your culture can be used in another.

For instance, in the United States, it’s normal to smile at a stranger – that is seen as a warm and welcoming sign.

Go to Russia and they won’t view it the same way. There, you can even come across as impolite if you smile for a stranger.

Fly on over to Asia and a smile can have a different meaning depending on the context. In some Asian cultures, a smile can imply that you’re embarrassed and not happy.

The moral of this is that as a business-person, understanding your audience is key to nailing both verbal and non-verbal communication. 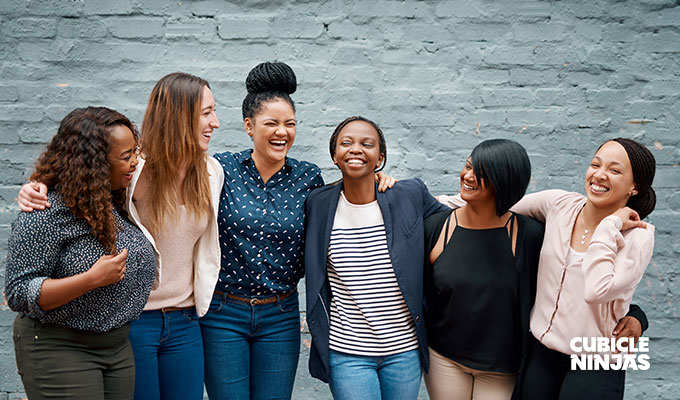 Findings from a 2013 study led researchers to deduce that non-verbal communication between co-workers at a job has major implications on how effectively an organization is run.

Establishing friendly interpersonal connections between co-workers is something that all business-leaders should strive for. If an employee doesn’t feel welcomed at work or doesn’t get a good energy from some of your staff, that can set back your organization’s productivity. 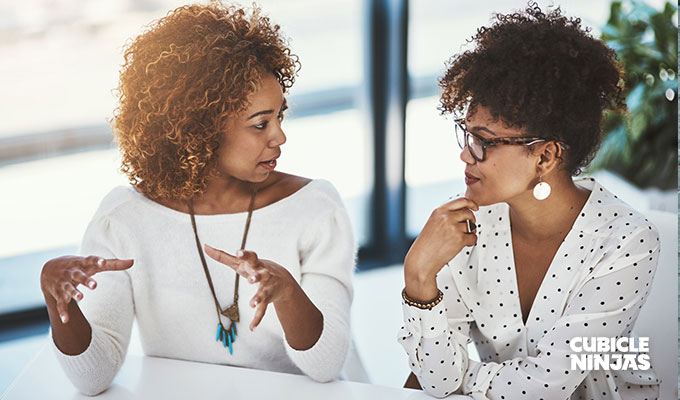 3. Gestures Do Help You Communicate

One study from Columbia University found that gesticulation helps a speaker communicate effectively with an audience. Researchers explained that someone who gesticulates actually helps convey the fullness of the message they’re trying to deliver. They’re speaking on two levels at once!

Similar results are seen in Science of People’s research across thousands of Ted Talks: 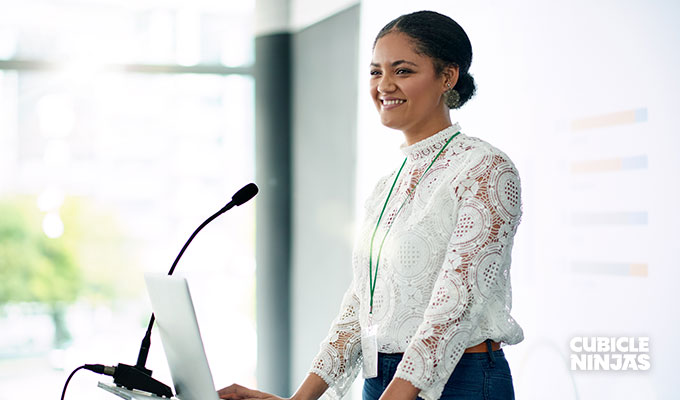 Whenever you’re speaking before an audience, you need to appear confident.

Business Insider concurs, recently citing stats showing that 55% of your presentation is non-verbal. It’s not about just saying something – it’s about sounding confident while you do.

Be sure to work on your paralinguistic expressions to ensure that you’re conveying confidence to your audience. 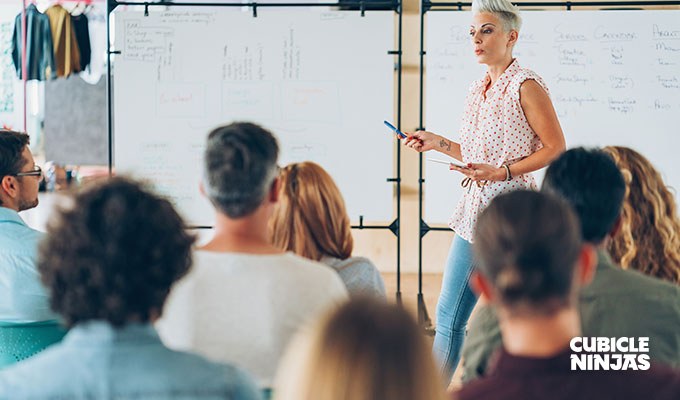 Business Insider also revealed some rather telling facts on verbal communication. Those stats showed that content is only valued at 7% in a presentation. This was verified in Science of People’s research as well.

We can’t stress it enough – it’s not what you say, rather, how you say it.

That’s why when you interact with your clients, you should pay more attention to what you don’t say as opposed to what you say. Adopt a welcoming-yet-authoritative attitude that exudes the perfect combination of confidence yet humility. You’ll see how far it goes in improving customer relations. 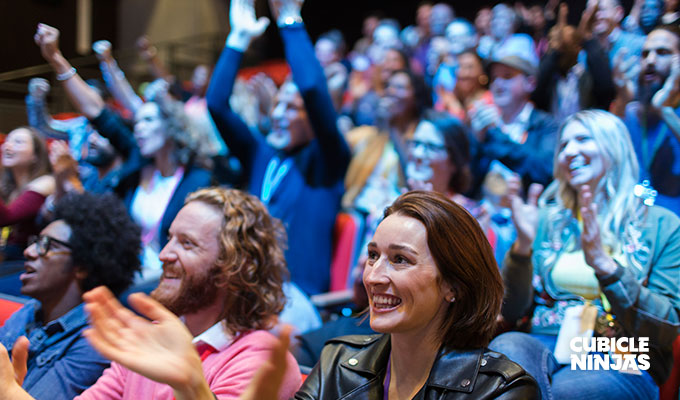 While understanding non-verbal communication helps you portray the right image to your audience, it also lets you know how they feel about you.

If you’re in the middle of a presentation and you notice that you’re losing some of your viewers, you should take that as a cue to add some more excitement. Do a quick check of your body language and try to generate some buzz in the room. Something as simple as maintaining eye-contact for just a little longer can make the difference between keeping and losing your audience. 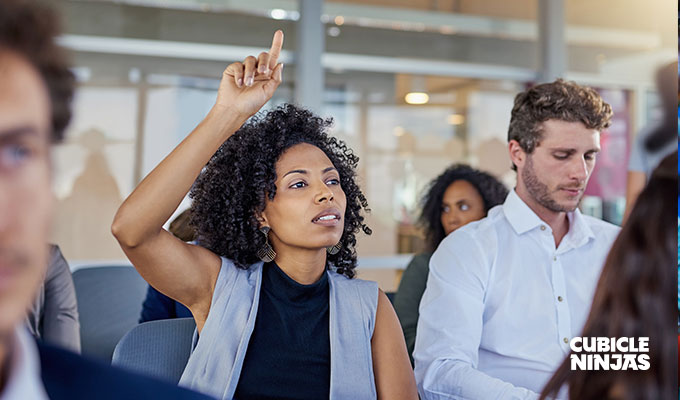 Speaking of eye-contact, The Wall Street Journal reports that researchers from Quantified Expressions determined that a speaker should maintain eye-contact for 60-70% of a conversation.

Doing so helps to establish an emotional connection between both parties and makes communication between the two more personable.

Looking for some creative help for your next presentation? Our team of talented ninja designers would love to assist!